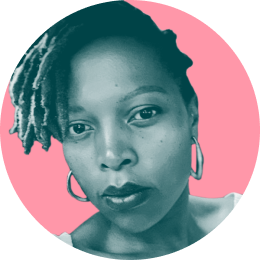 Thando is the Financial Director of the Radio Workshop and the Children’s Radio Foundation. Prior to joining, Thando spent almost ten years working in Program Management, Corporate Finance and Strategy for several multinationals. She holds a Bachelor of Commerce degree and an Honors degree in Business Finance. Thando is also a Chartered Financial Analyst.

Martha is our Managing Director. She worked for the Children’s Radio Foundation as a program manager, innovations associate, and development consultant for over 5 years. She previously was a satirical video producer at Magamba Network (Zimbabwe) and received a MTV-U Fulbright Scholarship (Zambia). Martha holds a BA from New York University.

Freddie Boswell is our Training Producer. Freddie began her career working on African News, Arts and Current Affairs at the BBC World Service in London. After a 2-year stint reporting from Zanzibar, Freddie joined NPR’s Morning Edition and later Tell Me More. Freddie has produced Tiny Spark from her base in the Middle East since […]

Amy Costello is our Training Editor. For four years, Amy was the Africa Correspondent for PRI’s The World. Amy’s television investigation Sudan: The Quick and the Terrible was nominated for an Emmy Award. In 2011, she launched Tiny Spark, which investigates nonprofits, philanthropy and international aid. It was acquired by The Nonprofit Quarterly in 2018.

Andile Msomi is a Producer and Trainer. She manages our training programs and is skilled in radio production, audio editing, and scriptwriting. Andile holds an Honors Degree from the University of Kwa-Zulu Natal.

Dhashen Moodley is our Senior Producer. He has over ten years of experience in public radio in South Africa. Dhashen hosted and produced the Radio Browser podcast for the curation site The Browser and produced an episode for 99% invisible.

Lesedi Mogoatlhe is our Editorial Director. Lesedi most recently worked with LGBTI organizations across southern Africa to develop their own podcasts. She has a background in documentary filmmaking, having worked in the South African TV and Film industry for almost 20 years. She holds an MA in Documentary Filmmaking from Sussex University.

Jo Jackson is the Communications Manager of the Children’s Radio Foundation and our Associate Producer in training. She holds an MA in Creative and Life Writing from Goldsmiths University of London and was shortlisted for the Wasafiri New Writing Prize 2018. She is also a graphic designer and illustrator.